skip to main | skip to sidebar

An overview of Diabetes Prevalence in India | Krea Healthcare Panels

India is the second highest populated country and has the highest number diabetic patients followed by China and USA. Around 50.8 million people in India had diabetes in 2010. The diabetic prevalence is high among Indians (including NRIs) when compared to other ethnic groups. It is very unfortunate that diabetes affects Indians at younger age when compared to the western counterpart. The major factor for this condition is Asian Indian Phenotype - a unique phenotype characterized by increased abdominal obesity and visceral fat despite low body mass index (BMI).

In India, Diabetes prevalence is very much high in urban population and comparatively low in rural population. 11% of the obese, sedentary, urban Indians have diabetes and 0.7% of non-obese, physically active, rural Indian develops diabetes. Prevalence is higher among affluent, educated urban Indian and lower among poor, uneducated rural people. But the scenario in rural India is also changing due to the socio economic transformation.

Timeline Prevalence of diabetes in different parts of India: 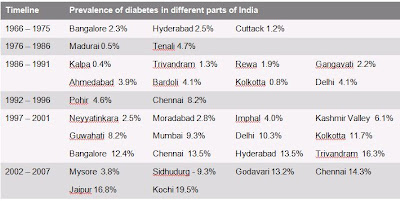 krea
krea stands for 'energy/action'. Krea is a specialist in healthcare research and data collection. Talk to us today to connect with Indian Physicians and Patients. Listen to the voice of India. Leverage our Healthcare and Youth panels.